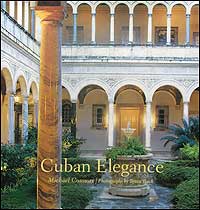 Since Christopher Columbus landed there after a short stint in the Bahamas circa 1492, the biggest island of the West Indies has developed a rich culture and history steeped in European tradition and native commodities. Records of Cuban history are hard to come by and eyewitness accounts to that time are even harder to find, but a story can be told through the architectural and domestic relics left behind. Michael Connors conveys this in his book Cuban Elegance.

The book begins its history with the landing of Columbus in the fifteenth century and the start of European influence. Connors’s study delves into Cuba’s role as a way station for Mexican gold being shipped back to Spain and examines the cultivation of the country’s tobacco and sugar industries that made the then Spanish empire extremely wealthy and the envy of the European powers.

The book’s timeline spans five centuries in 176 pages including 185 color photographs by Bruce Buck. Each photo portrays lavish pieces of art and furniture whose details show the influence of various cultures on the island, including Spanish, Arabic, French, English, Dutch and African.

A reader follows along as Connors, a professor at New York University with a PhD. in decorative arts, explores the events of the time through the spectrum of different works, from tables to cathedrals, produced by the various inhabitants.

Published by Harry N. Abrams Inc., Cuban Elegance is sold in hardcover and retails for $40. Go towww.abramsbooks.com for more information.