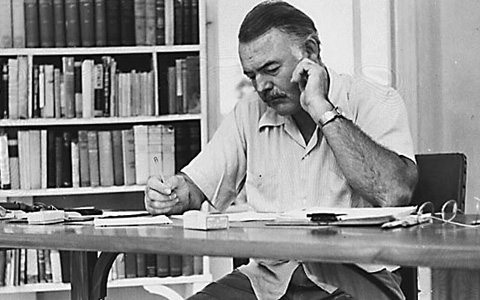 The stay for more than two decades of American writer Ernest Hemingway in Havana is still a mystery for fans of his work on the island and around the world–as Presnsa Latina reports.

His house at Finca Vigia, the places where he left footprints as Floridita bar and restaurant where he used to enjoy his daiquiri and fishing tournaments of the marlin in the northern coastal Cojimar, safeguard his path through Cuba.

Hence, researchers from all latitudes approach the International Symposium dedicated to his life and work, which is hosted every two years by the museum house in San Francisco de Paula.

To this event, recently held here, came a hundred of scholars, curators, artists, enthusiasts all of his literary stamp, to follow the latest routes, the steps of the author of The Old Man and the Sea by this city.

Beyond lectures, theoretical debates and talks on specific topics, such as the preservation of the property where he settled in Havana since 1940, the passions for hunting, his time in Africa, and his touch by letters with friends and colleagues, the meeting brought a group of imitators, winners of a contest for people similar to Papa, as his relatives used to call him.

All of them exceeded six decades, with robust appearance, and graying hair and beard. On the streets people get us mixed up, they look at us in amazement. Some of them scream: “ÂíHemingway!;” others: “ÂíPapa!,” commented a few in the corridors of Palacio O’Farril Hotel, where the theoretical sessions took place.

The meeting was also a tribute to this narrator from all art forms. A theatrical production, La Habana caliente de Hemingway (Hemingway’s Hot Havana), brought the Canadian Brian Gordon Sinclair, another passionate, with a meticulous physical characterization too, who confused everyone on stage, with his anecdotes and transcendental passages of the Nobel in Literature.

In the extensive theoretical program, participants spoke about the first steps of Hemingway as a writer as well as his extensive epistolary.

Susan Wrynn was also in line with the correspondence issue by dedicating her talk to the letters between the novelist and the Italian Gianfranco Ivanovich, Adriana’s brother, one of the fleeting lovers of the author of The Old Man and the Sea.

On his passions for fishing, especially the needlefish, abounded Cuban writer Ismael Leon, while the American academic Michael Connor explored the architectural values and the current preservation of Finca Vigia.

It is real, highlighted the specialist. The house currently holds that same environment, where the writer lived and wrote seven of his books, including The Old Man and the Sea, which won the Pulitzer Prize in 1953.

The building, its current preservation, evokes Hemingway. It’s like he was still there, he said.

Connor took a tour around the museum house using images. With pictures from that institution’s collection, he made a parallel between ancient and modern images and highlighted, for example, the conservation of the furniture, made from Cuban mahogany and based on Mary Welsh’s designs (1908-1986), his fourth and last wife.

The specialist also exhibited other images, many of them from the author of The Snows of Kilimanjaro in his living room, surrounded by memories like the dissected heads of animals hunted on safari in Africa.

Also pictures of a few moments spent in his library, an area of particular significance. At times, Hemingway worked in a standing position and the same way he wrote, Connor told.

The selection included other photographs, in some of them the writer was accompanied by several of his pets, like his dog Black and his cat Ecstasy, as well as his sons, Patrick and Gregorich, who used to spend a long time on the Island to visit his father.

The conference was a unique opportunity to once again get into the exciting world of the writer, who decided to stay in Cuba a part of his life to define himself as a “cubano sato” (an ordinary Cuban).