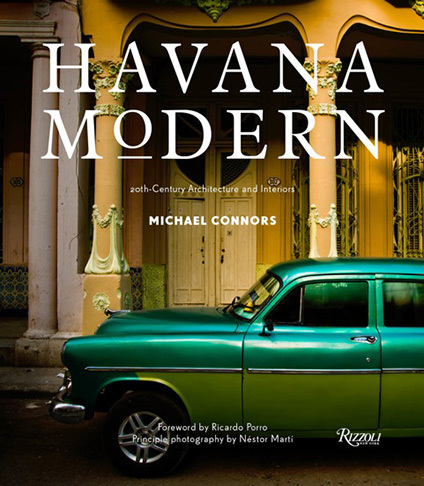 Havana Modern: 20th-Century Architecture and Interiors is yet another spectacular book on Caribbean architecture and decorative details by Dr. Michael Connors. With a foreword by Cuban-born architect Ricardo Porro and principal photography by Néstor Martí, also from Cuba, this book promises a tour of Havana’s magnificent private homes and the dazzling settings that house some of the city’s iconic public institutions. This jewel of a book will be on the shelves in September 2014.

Description: Caribbean design expert and historian Michael Connors takes readers on an unprecedented tour of the Cuban capital’s most architecturally significant private homes and buildings in HAVANA MODERN: 20th-Century Architecture and Interiors.  Spanning the early 1900s to 1965, this lavish volume offers a thoughtful survey of the modern movement in Cuban architecture, covering Art Nouveau and Art Deco through the flowering of high modernism just before the Revolution. Gorgeous, full-color photographs showcase the best examples from the artsy Vedado neighborhood and seaside streets of Miramar, to Central Havana and the posh Country Club Park area.  In addition to highlighting homes and spaces which are mostly inaccessible to visitors and have never before been photographed, HAVANA MODERN features some of the city’s most iconic places, such as Cuba’s remarkably futuristic National Schools of Art; the landmark Art Deco Bacardi building; Casa de Alfred von Schulthess by Richard Neutra; the stylish Habana Riviera Hotel and its original 1957 interiors; the Hotel Nacional de Cuba, designed by McKim, Mead & White, on Havana’s seaside drive, the Malecón; and the world-famous Tropicana cabaret nightclub by architect Max Borges Jr.

About the authors: Michael Connors has more than thirty years of experience in writing, consulting, and teaching in fine and decorative arts. He has authored many books includingCaribbean Houses and The Splendor of Cuba, both published by Rizzoli. Ricardo Porro is a Cuban-born architect.  In 1961, he was designated as the head of design for Havana’s National Schools of Art. Néstor Martí is a photographer living and working in Havana. His work has been published in a wide range of books and magazines.

Read the review at Repeating Islands